About the Theatre
Seating Plan
Everybody’s Talking About Jamie

The Apollo Theatre London, located on Shaftesbury Avenue, first opened its doors on 21st February, 1901, making this building over a century old! Designed in the renaissance style, the Apollo Theatre was built specifically for musicals, and opened with an American musical comedy, The Belle of Bohemia. Named after the God of the Arts, the Apollo Theatre has seen numerous shows during its time, the most successful of which was the comedy Boeing Boeing in 1962. 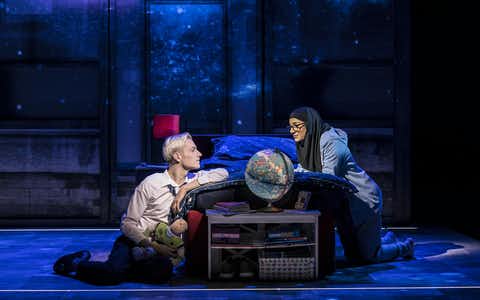 This incredibly forward-thinking and unconventional tale follows the real-life experiences of 16-year-old drag queen Jamie Campbell and how he decides, one day, to go to his school prom in a dress. With heartfelt lines by Tom McRae of Doctor Who fame, and infectious, catchy numbers by Dan Gillespie, you can’t help but feel inspired by Jamie’s style, confidence, and his journey towards self-acceptance. Starring John McCrea as Jamie, this show is a must-watch, if for nothing else but its wonderfully positive and motivational message in today’s uncertain times.

Sixteen-year-old Jamie New is unusual – not only is he openly gay, but he also hopes to attend his school prom in a dress (despite his school’s psychometric evaluation telling him he should become a forklift operator). After being gifted a pair of bright red heels by his mother (who is just as unconventional), Jamie decides to fulfill his dream. With the help of his supporting and loving mother and friends, Jamie stands up to his school teachers and the surrounding homophobia, and realizes his destiny as a drag queen.

An accessible entrance is located on Shaftesbury Avenue, which leads to a platform lift down to the Stalls.

Please note that the Stalls are not suitable for scooter users. There are two wheelchair spaces in Row Q - Q1 and Q22, and two transfer spaces available per performance to any aisle seat. As there are no customer lifts, it is best to avoid Dress and Grand Circles.

Assistive Listening System: The theatre has a Williams Sound hearing assistance system, and headsets are available on a first-come first-served basis.

Bar: The theatre has two bars, one in the Stalls and one in the Upper Circle.

Cloakroom: There are cloakroom facilities at the Apollo Theatre and pushchairs can be checked. Items cost £1 to check in.

Toilets: Both Stalls and Grand Circle have access to both male and female toilets. There is a fully adapted unisex toilet in the Stalls.

1. Bocca Di Lupo: If you’re craving some authentic Italian food, this is the place to be – indulge in some sea bream carpaccio with orange zest and rosemary; arancini filled with soft cheese and pistachio; or even tagliolini gratinati with prawns and Treviso while at Bocca Di Lupo.

2. Ham Yard Bar at Ham Yard Hotel: The Ham Yard Bar is a great place to unwind with friends and fun, modern drinks after your show at the Apollo. Sample the Rosemary Vesper, the Black Mamba or the Smoke n’ Bubbles!

3. SHORYU RAMEN Soho: Slurp down some delicious Dracula tonkotsu and wolf down some hirata buns – just a few of the wide range of Japanese food offered – before your show at Shoryu Ramen!

4. Hot Pot: As the first London site for Hot Pot, visit this Chinatown location for a cook-it-yourself meal – choose your own broth, meat, vegetables, and sauces! Definitely a fun end to a great day at the theatre.

5. Babaji Pide: Try Babaji’s twists on the traditional Turkish ‘pide’, or boat-shaped pizza, as well as their extra-special desserts, like the kagit helva' wafer and ice-cream sandwiches.