Located in Northumberland Avenue adjacent to the iconic Trafalgar Square, the Playhouse Theatre is a popular West End house. One of the oldest theatres in London, the Playhouse opened on 11th March 1882 with a production of Jacques Offenbach's Madame Favart. The theatre hosted a variety of performances in its initial run, including comic operas, farces and burlesques. In 1905, the theatre underwent major renovation to the designs of Blow and Billerey and officially reopened in 1907 as the Playhouse. After a couple of decades, the theatre was taken over by the BBC as their recording studio and was used for the same purpose till 1977. In 1987, the theatre was restored to its 1907 design and began functioning as a theatre house again. In the late 20th century and early 21st century, the theatre underwent a couple of notable ownership changes but as of December 2013, is 100% owned by ATG.

In its 136 year long existence, the Playhouse Theatre has hosted some truly spectacular shows, such as Three Sisters, The Rocky Horror Show, Dancing in the Streets, Footloose, The Adventures of Tintin, Dreamboats and Petticoats, Monty Python Spamalot, An Inspector's Call, The Kite Runner, The Best Man, Caroline, Or Change and countless others! Presently, the Playhouse Theatre is set to host Fiddler on the Roof, which is transferring from the Menier Chocolate Factory. The production is scheduled to begin playing at the Playhouse from 21st March 2019. If you're planning on catching the musical, but are unaware of which seat to opt for, we have just the thing for you. Our Playhouse Theatre seating plan has everything you need.

The theatre is set to host Fiddler On The Roof.

Fiddler On The Roof 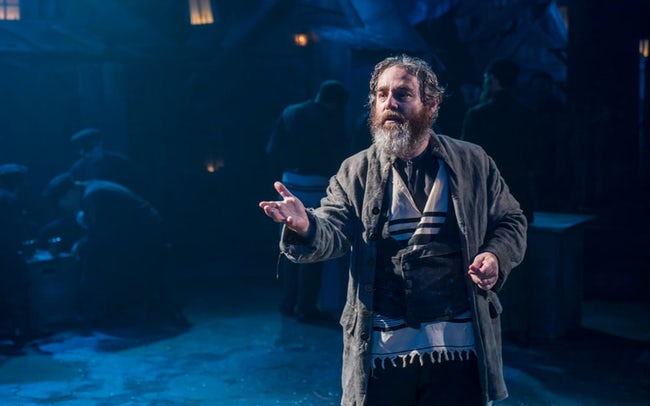 After a four months’ sold out run at the Menier Chocolate Factory, the classic Broadway musical, Fiddler on the Roof, transfers to the Playhouse Theatre. The show is directed by Tony and Olivier Award-winning director, Trevor Nunn and has been hailed by critics as being an 'exuberant revival’ (The Telegraph) and a 'shiveringly intimate chamber musical about family’ (The Times). Fiddler on the Roof, adapted from Tevye and his Daughters and other tales by Sholem Aleichem, first premiered on Broadway in 1964 and ran for over 3,000 performances. The West End production opened in 1967 and won the same amount of love from both critics and audiences. The show was also adapted to a feature length movie in 1971 and other theatrical revivals and productions around the world.

The musical features music by Jerry Bock, lyrics by Sheldon Harnick, and choreography by Jerome Robbins, who won a Tony for his work in the original Broadway production. The book has been written by Joseph Stein and the show features an iconic score including Sunrise, Sunset, Tradition, If I Were a Rich Man, and Matchmaker.

Fiddler on the Roof is the story of Tevye, the father of five daughters. The musical highlights his struggle to maintain his Jewish traditions, both religious and cultural, as uncontrollable forces from outside try and disrupt his family's lives. The story hits a breaking point when three of Tevye's daughter reveal their choice of husbands. The revelation opens Tevye's heart to new possibilities and the entire close knit community faces the winds of change, together. Fiddler on the Roof is a joyous and timely celebration of life and all its glory, backed with iconic musical numbers.

2 hours and 50 minutes, including 1 interval

Click here to get a discount code for booking Fiddler On The Roof tickets.

Stalls: This section can be accessed without any steps from the theatre foyer and is ideal for wheelchair users. There are 6 transfers available into aisle seats and two wheelchair spaces in row G and J, with companion seats available as well. Aisle seats in this section feature extra legroom.

Dress Circle: This section can be reached after a climb of 28 steps from the theatre foyer.

Upper Circle: The furthest section from the stage, the upper circle can be accessed via 82 steps from the theatre foyer. The theatre doesn't have any customer lift, which means that this section is not ideal for patrons with limited mobility.

Wheelchair Accessible: The stalls section has wheelchair accessible seats in rows G and J. There are 6 additional transfer seats available in the stalls and the wheelchair can be left with the theatre staff for safe keeping.

Restroom: The Playhouse Theatre has male and female toilets in the basement bar but there are none available at the stalls section. Both the dress circle and upper circle sections have two female and three male toilets in total, with the upper circle having two toilets for men. The main foyer has an adapted toilet which is wheelchair accessible.

Bar: Each section of the theatre, including stalls, dress circle, and upper circle has a bar. The basement also has a bar and a wheelchair accessible bar is located in the main foyer as well. Drinks can also be brought to patrons in their seats.

Assistive Listening System: At present, the Playhouse Theatre does not feature a sound amplification system.

Cloakroom: Large items can be stored at a cloakroom for the duration of the show. Please check with the theatre staff if you're bringing any large baggage.

The Playhouse Theatre is situated next to River Thames and is walking distance from popular London attractions, such as the Buckingham Palace, the London Eye, and St. James’s Park. Given that the theatre is in such a prime locality, there are plenty of ways to get there. Here are our top picks:

By Rail : Charing Cross is the nearest National Rail station to the Playhouse Theatre.

Boat: If you're in the mood for an adventure, you can also opt to take a boat to the theatre. The Embankment Pier is close to the Playhouse Theatre. From the pier you can also catch boats to and from other London areas like Greenwich and St. George’s Wharf.

1. The Northall: If you're craving seasonal British fare, this high ceilinged hotel dining room with designer lighting is where you to be.

3. Sherlock Holmes: Featuring a restaurant and roof garden to boot, this traditional pub features Holmes-themed memorabilia, which gives it much of its appeal.

4. The Princess of Wales: This Nicholson's pub is named after George IV's first wife who he married in secret and never became his queen.

5. Smith & Wollensky: If you're in the mood for some American steaks and wine, this high-end, white-tablecloth spot covered in mahogany is where you should be at.

6. Barrafina: Discover Spanish delights that are served with sherry, cava and more, at this cosy, diner-style tapas bar.