Get an Unforgettable Cabaret Experience With Your Moulin Rouge Paris Tickets

Step into the dazzling world of rhinestones, feathers and sequins with an enchanting night at the Moulin Rouge! So much more than just a show, an evening at this famed Parisian cabaret is sure to be an unforgettable experience.

Situated in the heart of the lively Montmartre district, the Moulin Rouge is instantly recognizable with its lipstick-red facade and giant windmill. For over 125 years, the theater has been showcasing the talent of hundreds of actors, dancers, make-up artists, costume designers and stage decorators, including the legendary Ella Fitzgerald, Liza Minnelli and Frank Sinatra. Known as the birthplace of the French can-can dance, the Moulin Rouge was co-founded by Joseph Oller and Charles Zidler with one main objective in mind: to become the greatest venue embracing the art of dance, entertainment and femininity. An early harbinger of female liberation and empowerment, in the world of cabaret, it’s the ladies who lead the show!

Since the theatre first opened its doors in October of 1889, the Moulin Rouge continues to evoke the spirit of a festive Paris. A production that highlights pleasure, fun and freedom, the cabaret attracts 600,000 spectators a year. With a sensational explosion of feathers, sparkles and color, witness the French can-can come to life as you sip champagne in one of the most beloved entertainment hotspots.

For more information about Cabarets in Paris, click here. 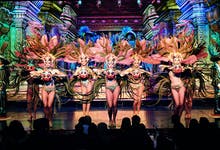 Is Moulin Rouge Paris worth visitng?

The Moulin Rouge is a must-visit attraction in Paris, solely because of the amount of work that goes into creating a single show. With music and song, dances, and even costumes being created from scratch, it is impossible to not enjoy this magnificent display of colour and sparkles.

The Moulin Rouge is one of the premier tourist attractions in Paris, attracting people from across the world - with 600,000 people visiting every year, including some of the most famous people in the world. In fact, on November 23, 1981, the Moulin Rouge closed its doors for one night to present its show to Queen Elizabeth II!

Viewers spend two hours stunned by the fascinating display of glittering feathers and dazzling lights, as they enjoy the performances put up by some of the best artists in the world.

The current show being performed at the Moulin Rouge is “Féerie”. A fantastic cabaret review, the production brings together an extensive troupe of performers, including 60 beautiful Doriss Girl Dancers recruited from all over the world, costumes created in Paris's prestigious studios, and stunning rich color stage sets created by Italian artists. Guests can attend a show with or without dinner and can also select ticket options that include champagne.

Your Experience at Moulin Rouge

While all Moulin Rouge performances are the same, there are two between the Dinner Show and the Late Night Show, you can choose to have dinner at the Moulin Rouge before your show, or end your night on a high note as you enjoy the show with champagne.

Save €6 on Moulin Rouge Paris tickets. Use promo code GOPARIS

Check off multiple items on your Paris bucketlist with a Moulin Rouge combo ticket. An excellent way to save money, our combination tickets are specially designed to help you experience the best of Paris, without breaking your wallet.

About the Show: Féerie

Created by Doris Haug and Ruggero Angeletti, “Féerie” has been in production at the Moulin Rouge since 1999. The fabulous cabaret consists of a troupe of 80 artists, including 60 Doriss Girls recruited from around the world. The show also features over 1,000 colorful costumes made of feathers, rhinestones and sequins. Produced in the most famous Parisian workshops, the elaborate costumes are an absolute highlight of the show! But that’s not all - phenomenal sets uniquely designed by Italian artists, a giant aquarium in which an aquatic ballet takes place, and outstanding international acts also bring life to the stage. Set to an original musical score written by Pierre Porte and Roland Léonar and performed by a team of 80 musicians and 60 chorus singers, a trip to the Moulin Rouge is a feast for all the senses!

In addition, the show is broken up with all sorts of acts, including the fastest juggler in the world, an acrobatic duo performing spellbinding hand-to-hand acrobatics and more.

The Moulin Rouge is open every day of the week, from 7 PM to 1 AM. Each night, there are two shows: the first at 9 PM, followed by a second at 11 PM. (The 11 PM show is only on Fridays and Saturdays). There is no difference between the 9 PM and the 11 PM show and the performances are exactly the same.

The dinner show begins at 9 PM. Guests that choose the Moulin Rouge Paris tickets with dinner option can have dinner at 7 PM before the first show starts at 9 PM, allowing for two extra hours inside the fabulous Moulin Rouge, while the ones that do not want dinner can come directly for the show at 9 PM. The Late Night Show with Champagne commences at 11 PM.

Situated at the heart of the lively Montmartre district of Paris, the Moulin Rouge can easily be reached by taxi or public transport. It is located level with the Place Blanche on Boulevard de Clichy, just next to the Place Pigalle and the Musée de l’Erotisme.

From the Louvre Museum
From either Louvre Rivoli or Palais Royale Musée de Louvre, take line 1 (yellow) of the Métro until you reach Charles-De-Gaulle/Etoile. Switch to line 2 and continue until you reach Blanche.

From the Charles de Gaulle Airport (CDG)
From either Terminal 1 or Terminal 2 hop on the RER B line in the direction of Paris. Disembark at the Paris Gare du Nord station. From there, switch to line 4 (dark pink) until Barbès-Rochechouart, and finally switch on to line 2 (dark blue), getting off at Blanche three stops later.

From the Orly Airport (ORY)
From the airport, take the OrlyVal train towards Paris, and disembark at Antony station. From there, transfer onto the RER B train (thick blue line on Métro maps) and travel to Gare du Nord, before taking line 4 to Barbès-Rochechouart and then line 2 to Blanche.

Getting back after the show
The Metro opens at 5:30 am every morning and closes at 1:15 am Monday through Thursday and on Sunday, with a later closing time of 2:15 am on Friday and Saturday. If you’re attending an 11 pm show, we suggest you pre-book a cab for transportation after the performance. It can be quite difficult to hail a cab late at night. Booking an UBER is another excellent option.

I was hesitating about checking this one out, as I initially found it a bit pricey. But I am sure glad I went! The show is spectacular, thought til the last detail, and just engrossing. Two hours passed so fast. To organize such a show, there are so many performers involved,all with magnificent costumes, that in the end I found the price fair. Tip : this place is classy, while not compulsory, you are expected to dress up. I decided to go quite spontaneously, and I think I was the only woman wearing jeans.

We visited Paris 15 years ago and visited Moulin Rouge. We went ahead and booked the show since we were traveling with family this time and they had not been to Moulin Rouge. (So glad we did) The show had several new additions and was breathtaking! Amazing talent!

Read what others have to say about Moulin Rouge in Paris on TripAdvisor.

Save €5 on your first booking with Headout when you use promo code 'GOPARIS'!