About The Theatre
Seating Plan
The Phantom of the Opera

Her Majesty’s Theatre London was established in 1705 as Queen’s Theatre by architect and playwright John Vanbrugh. This theatre premiered more than 25 operas by George Frideric Handel, and also became the site where London performances of Mozart’s La clemenza di Tito, Così fan tutte and Don Giovanni unfolded for the first time in early 19th century.

In its present form, the theatre has 1216 seats and hosted some landmark productions in the early 20th century. During the First World War, the theatre’s wide stage made it a favourite for staging large scale musical productions. It has seen record breaking runs of musicals like Chu Chin Chow, and the current production, The Phantom of the Opera by Andrew Lloyd Webber, which has been playing at Her Majesty’s Theatre since 1986.

The Phantom of the Opera

“The music is soaring and operatic. The characters are archetypes in a way that speaks to the timelessness of mythology. For example, the Phantom is flesh and blood and also "there, inside your mind". He is the angel of music, but he looks like the devil.”
- The Guardian 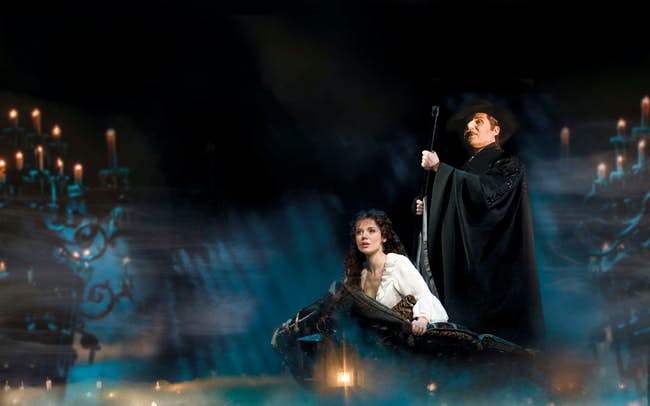 The Phantom of the Opera revolves around Christine Daaé, the beautiful soprano who becomes the obsession of the mysterious and disfigured musical genius who lives beneath Opera Populaire in its subterranean labyrinth. The musical is based on the phenomenal novel by French author Gaston Leroux named Le Fantôme de l'Opéra.

2 hours and 35 minutes, with one intermission

Book Phantom of the Opera tickets and save £7 on your first booking. Use promo code 'GOLDN'!

The exit door on Charles II street has level access, with a slight slope to the rear stalls. There are three spaces for wheelchair users in row S. Transfer seating is available to any aisle seats in the Stalls. It is recommended that patrons with limited mobility book seats in the Stalls section.

Please note that there is an infra-red system for those hard of hearing, and headsets are available in the cloakroom next to the Stalls bar.

Bar: Every section except the Balcony has a bar. Drinks may be brought to disabled customers in the auditorium.

Cloakroom: There is a cloakroom at the theater. Large items can be checked in for £1 each.

Guide Dogs: Guide dogs are allowed in to the auditorium. Alternatively, staff are happy to dog sit a maximum of four dogs per performance.

Toilets: There are male and female toilets on each level of the theater. The adapted toilet is on the left of accessible entrance on Charles II Street.

Restaurants near Her Majesty's Theatre

1. Brumus, Haymarket Hotel: If you are looking to have a hearty lunch, Brumus is a must try as it offers great ambiance and an excellent menu, complete with Wine and Coffee options

2. London Beer House: The tiny beer place serves craft beer and is a great place to just enjoy and relax. Afternoons are less crowded but evenings can be a full house.

3. Assaggetti : Assaggetti has a dish for every age- go in with your family and kids, or with your friends- you will come out happy!

4. Spaghetti House: This place offers reasonably priced yet delicious food options, and is perfect for those looking to enjoy some pizza or Italian dishes.

5. The Balcon: A fine-dining option, the Balcon offers a small and interesting menu of dishes and a generous list of Wine you can enjoy.