About The Theatre
Seating Plan
School of Rock

The Gillian Lynne Theatre opened in 1973, and was designed by Paul Tvrtkovic at a site that had hosted many forms of entertainment since the 1600s. This area was once a tavern, a saloon, a music hall, and then a theatre bar called the Winter Garden Theatre. This was eventually demolished to make way for the Gillian Lynne Theatre. Being a rather modern theatre, its auditorium is designed to host a selection of unusual plays – its stage, orchestra pit and some of its stalls can be turned 360 degrees. The first production to play this house was The Unknown Soldier and His Wife, starring Peter Ustinov. The musical Grease arrived later that year, and launched the career of film actor Richard Gere. The musical Cats also played at this theatre for a period of nearly 21 years, starring Brian Blessed, Elaine Paige, Bonnie Langford, and a cast of the best singers and dancers London had to offer. The theatre was renamed from New London Theatre to Gillian Lynne Theatre, after famous West End choreographer Dame Gillian Lynne on May 1, 2018.

Andrew Lloyd Webber returns to Gillian Lynne Theatre with School of Rock, which has been playing since November 2016. Also, here’s a handy link to the seat availability and real time prices for different seats/dates for School of Rock West End on Headout.

“The most enjoyable few hours money can buy.”
- The Telegraph 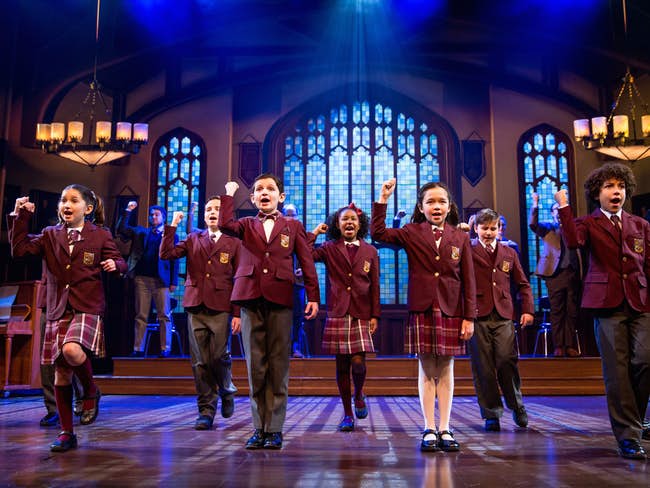 Based on the hit movie School of Rock, this musical showcases an astonishingly talented cast of three children’s bands who perform live on stage, and even perform guitar and drum solos. Following a highly successful Broadway run, this musical made its West End debut in November 2016, and has since won multiple awards, including the Whatsonstage Best New Musical Award and the Laurence Olivier Outstanding Achievement in Music Award for the children’s bands. Featuring Stephen Leak as the wannabe rock star Dewey Finn (played by Jack Black in the movie), Florence Andrews as Rosalie Mullins, and Alan Pearson as Ned Schneebly, this musical has received rave reviews from critics and audiences alike. It also features 14 new songs, as well several scores from the movie by Andrew Lloyd Webber, who took the show to another musical level, and even impressed Jack Black!

Dewey Finn’s master plan to earn a few extra bucks by posing as a substitute teacher at a prestigious prep school backfires when he meets his sharp and sprightly class of straight-A private school students. Drawing on his past as a failed rock star, he decides to start a rock band with his class, and enters them in the Battle of the Bands. While teaching these pint-sized prodigies what it means to truly rock, Dewey falls for the school’s beautiful but uptight headmistress, and helps her inner wild child.

Book School of Rock tickets and save £10 on your first booking. Use promo code WE10!

There are two spaces for wheelchair users at S17 & S18 in the Stalls where companions can sit next to you.

Bar: The theatre has two bars in the main foyer which serves both Stalls and Circle patrons.

Cloakroom: There are cloakroom facilities in the theatre and items cost £1 to check in. Suitcases and pushchairs can be checked.

Guide Dogs: A maximum of 2 guide dogs are allowed in to the auditorium. Alternatively, staff are happy to dog sit.

Toilets: The Gillian Lynne Theatre has both male and female toilets in foyer and at both Stalls and Dress Circle levels. Access adapted toilets are en route from the lifts to the auditorium.

1. Circus: Enjoy delicious pan Asian food at this cabaret restaurant with its own burlesque performers, acrobats and dancers.

2. The Rock and Sole Plaice: If you want a truly British experience, visit this restaurant, one of London’s oldest chippies and enjoy the classic crispy battered cod, chips and mushy peas.

4. Sway: If you’re up for a bit of dancing after the play, hit up this popular party venue and enjoy craft beers, classic cocktails, pizzas and boards to share!