The Duke of York’s Theatre is an established West End venue located on St. Martin’s Lane in the City of Westminster. The theatre initially opened as the ‘Trafalgar Square Theatre’ in 1892, with the comic opera ‘The Wedding Eve’. This name did not stick around for too long, as it was soon changed to ‘The Trafalgar Theatre’ in 1894, before finally becoming the Duke of York’s Theatre in 1895, as a tribute to King George V. The theatre was designed by renowned architect Walter Emden, and started out with a capacity of 900 seats across 3 levels - Stalls, Royal Circle and Upper Circle, with several boxes on each level.

The Duke of York’s has staged a number of famous and successful productions with the first of them being ‘The Gay Parisienne’ which ran for 369 performances in 1896. Other notable shows that have taken the stage here include - ‘The Happy Marriage’, ‘Gilt and Gingerbread’, ‘The Killing of Sister George’, ‘Half Life’, and more recently ‘Our Ladies of Perpetual Succour’, ‘King Lear’ and ‘The Moderate Soprano’.

In the month of November 2019, Duke of York's Theatre will host 'Touching The Void'. 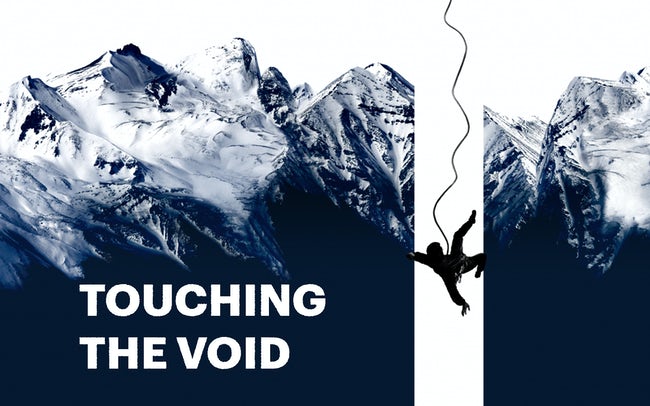 Based on the memoir written by mountaineer Joe Simpson in 1985, Touching the Void reimagines his devastating and nearly fatal, albeit successful scaling of the Siula Grande in the Peruvian Andes. The book was a best-seller and sold more than a million copies in addition to being translated to over 20 languages. The book was adapted into a documentary fifteen years later and it won the Best British Film award at the 2003 BAFTAs. Adapted to the West End stage by David Greig, the show wonderfully captures the traumatic experience of the two climbers.

After successfully scaling the Siula Grande peak in the South American Andes, Joe Simpson and Simon Yates prepare for their descent. Simpson breaks his leg after slipping and falling off a cliff. With bad weather conditions, the rapidly fading daylight, the duo are left to fend for themselves while making their way down to a safe spot. By tying two ropes of 150 feet each to form a 300-feet, they attempt to lower Simpson down the North Ridge. However, due to the worsening weather, the mountaineers are unable to stay in touch with each other and ultimately have to decide between themselves as to how to proceed without compromising on each other's safety. Watch the show to find out if the duo make it out successfully.

2 hours and 25 minutes, with 1 intermission

Click here to get a discount code for booking Touching The Void London tickets.

Stalls: The Stalls section can be reached by taking 23 steps down from the theatre foyer. Please note that since there is no central aisle in this section, it is not recommended for patrons with limited mobility.

Royal Circle: This is the most accessible section of the theatre with level access from the foyer to Row C of the auditorium. There are 2 wheelchair spaces located at either end of Row C and transfers are available at either end of Row D. Again, like the Stalls, there is no central aisle in this section.

Upper Circle: This section can be reached via 23 steps up from the theatre foyer. There is no central aisle dividing this section.

Food and Drinks: Food and drinks in plastic containers are allowed inside the theatre. Drinks that you purchase at the bar need to be transferred into plastic cups before you enter the auditorium.

Restroom: There are bars in the Stalls and Upper Circle section of the theatre. There is also a cocktail bar at the Duke of York’s theatre which is open to the public from 6-7pm before the show, so you can enjoy pre-show cocktails and drinks.

Bars: There are bars in the Stalls and Upper Circle section of the theatre. There is also a cocktail bar at the Duke of York’s theatre which is open to the public from 6-7pm before the show, so you can enjoy pre-show cocktails and drinks.

The Duke of York’s Theatre is situated at St Martin's Lane and can be reached easily by availing a number of public transport options.

Tube: The nearest tube stations to the theatre are Leicester Square (Northern and Piccadilly Line) and Charing Cross (Bakerloo and Northern Lines)

Restaurants near Duke of York's Theatre

If you’re looking for a quick bite or an elaborate meal before or after you West End experience, we have just the thing for you. Here are our picks of the top restaurants near the Duke of York’s Theatre:

1. La Roche: Serving up some delicious Mediterranean cuisine, La Roche is perfect for a quick pre-theatre bite! You can enjoy some great Lebanese Moussaka and couscous here. Lots of vegetarian options are available as well!

4. Abokado: Abokado is a chain of Asian fast food restaurants that can be found all across London. They are known for their quick service and healthy menu options! If you’re hungry and in a hurry, this restaurant is for you.