Brooks Atkinson Theater, established in 1926, is one of the 9 Broadway theatres functioning under the Nederlander Organisation. The theatre was originally named in the memory of Richard Mansfield before being renamed in 1960 as a tribute to New York Times drama critic, Brooks Atkinson. Over the years, Brooks Atkinson Theater has been host to many iconic Broadway productions like Spring Awakening, Rock of Ages, Grease, Lolita, among many others. Presently, the theater is running SIX : The Musical. If you’re planning on catching a show of this musical, our Brooks Atkinson Theater seating chart will help you find the best seats in the theatre amongst other handy tips. Also, here's a handy link to the seat availability and real time prices for different seats/dates for 'SIX : The Musical' on Headout.

Feminism and British history are rarely on the same page but Six attempts to bring them together in a neon-designed rock-concert on stage.

Navigate to the questions on your mind

The Brooks Atkinson Theater has a total seat count of 1029 across 3 primary sections - Orchestra (583 seats), Front Mezzanine (156 seats) and Rear Mezzanine(290 seats). Additional seating is available in the box, the pit beside the stage, and the standing row. Check out real-time availability and recommended seats on our Brooks Atkinson Theater Seating Chart.

• Value for money seats
Orchestra - Middle seats in Row E to J are quite decent and cost a lot less than the premium orchestra seats.
Mezzanine - The last two rows in front mezzanine (C-D) and the front couple of rows in rear mezzanine can also be considered value for money.
• If money were no matter
Orchestra - Middle seats (106-108) in the front row AAA offer the best look at the stage without any obstructions and also have the clearest sound.
Mezzanne - Middle seats (106-109) in the front few rows (A-B) offen an advantageous view of the stage.
• Best views of the stage
Orchestra - The middle seats (106-108) in the front row AAA and center seats in the next couple of rows (AA-D) are also equally good. Front Mezzanine - The front mezzanine is home to the next best set of seats (and in some opinions, the best).
• Best Legroom
Row A in Orchestra, row A in front and rear mezzanine and corner seats.

The 574 seats in the orchestra section are spread across three subsection and 18 rows (AAA-Q).

The three subsections, left, right, and center, each have varying numbers of seat count, with center orchestra housing the maximum number of seats. The left and right orchestra seats are odd and even numbered respectively while the center subsection seats are consecutively numbered.

Check out the real-time seat availability of the Orchestra section in the Brooks Atkinson Theatre.

The front mezzanine is the first of the two elevated levels in the Brooks Atkinson Theater and also the smallest. With only four rows (A-D) divided into three sections, left, center, and right, this section houses some of the best seats in the theatre.

Check out the real-time seat availability of the Front Mezzanine section in the Brooks Atkinson Theatre.

Check out the real-time seat availability of the Rear Mezzanine section in the Brooks Atkinson Theatre.

Which Seats Offer the Best View?

Unlike most smaller Broadway theatres that have only two section, orchestra and mezzanine, Brooks Atkinson has three section, the third being the rear mezzanine. If you’re wondering which seat would offer you best view of the stage, we have got you covered.

In the orchestra section, the middle seats (106-108) in the front row AAA offer the best look at the stage without any obstructions and also have the clearest sound. The center seats in the next couple of rows (AA-D) are also equally good, if not better, than the front row seats.

The front mezzanine is home to the next best set of seats (and in some opinions, the best). The middle seats (106-109) in the front few rows (A-B) offen an advantageous view of the stage. Do note that all the seats mentioned above are also the most expensive in the house, which brings us to the next question.

Spending close to $200 for one seat of a Broadway production is simply not possible for everyone. But that doesn’t mean that if you can’t shell out a considerable amount for tickets you’ll be stuck with the extreme corner or back row seats.

Talking about value for money seats, there are some great options you can pick from. The middle of the pack in orchestra (rows E-J) are quite decent and cost a lot less than the premium orchestra seats. The last two rows in front mezzanine (C-D) and the front couple of rows in rear mezzanine can also be considered value for money considering the clean view on offer and ticket prices.

How Far in Advance Should you Book SIX Broadway Tickets?

In general, the best seats is that they tend to fill faster than other sections, namely corner seats and back rows seats. So, the premium orchestra and front mezzanine seats generally fill up around 2 weeks in advance, which means you probably won't’ find the best seats if you plan on booking your seats at the last moment.

If you book your tickets at least 1-2 weeks in advance, you can score the best seats in the theatre. Headout, an online concierge for the best experiences in your city, allows you to book seats up to 90 days in advance!

What are the Best Options for Buying SIX Broadway Tickets?

If you’re looking to buy tickets for SIX on Broadway, there many options at your disposal. You can book tickets from the Brooks Atkinson Theatre Box Office or wait in line and get discounted TKTS tickets for SIX.

If you would rather not wait in line or pay for ridiculously overpriced tickets, you can check out Headout and get the best price on your SIX Broadway tickets! Headout, is an online concierge for wonderful experiences across the globe! More often than not prices on Headout will be cheaper than those on the official website.

The process of getting your Broadway tickets on Headout is very simple. Select your seat, make your payment, and show up at the theatre on the day of the experience! How to get to the Brooks Atkinson Theatre?

The Brooks Atkinson Theatre is located at 256 West 47th Street, placing it quite close to the iconic Times Square and thus opening up a lot of accessibility options.

Travelling in your car? There are numerous paid parking spots close to the theatre too. Some of them include LAZ Parking, Edison ParkFest, Bright Management, and Impark. Make your pick!

What Do You Need To Know Before You Go To The Brooks Atkinson Theatre?

Headout offers users a best price guarantee! This means you can catch all the popular Broadway shows of the season without spending too much

Wondering how to score cheap and discounted Broadway tickets for SIX? Get great last minute deals on Six: The Musical on Headout, your one stop, on-demand mobile concierge.

What are the Best Restaurants near the Brooks Atkinson Theatre?

2. City Kitchen: This takeout joint serves the city’s best ramen in a straightforward, no-fuss manner, focusing on the quality of the food instead.

5. The Lambs Club:: A clubby, art-deco style restaurant in 132 West 44th Street, with cocktails and steaks to die for!

Didn’t find what you were looking for? Our Theatre District food guide will help you out! 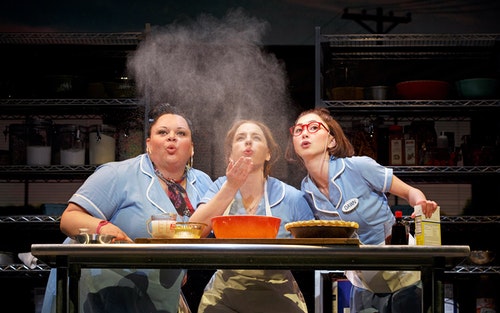 Enjoy Waitress on Broadway at a discount.

Have a question? Live chat with our experts 24/7
Brooks info

2 hours & 30 mins, including an intermission

The Brooks Atkinson Theater has 1044 seats
in total.