About The Theatre
Seating Plan
Six The Musical

The Arts Theatre is a small theatre in the heart of London’s West End scene that is well-known for showcasing unconventional and alternative productions. Located in Westminster, the Arts Theatre opened in 1927 as a members-only private club. It was set up like this in order to put up unlicensed and experimental plays and to avoid censorship by the Lord Chamberlain’s office. As a result of this, the theatre was able to put on plays that were otherwise banned from performing in the West End theatres.

The theatre opened with a revue called ‘Picnic’, but the first notable production that took place here was ‘Young Woodley’ by John Van Druten, which subsequently transferred to the Savoy Theatre. The Arts Theatre’s claim to fame came once Alec Clunes took over its ownership in 1942. He produced over a hundred successful plays here and raised the status of the theatre to that of a ‘pocket national theatre’. Some of the most commercially successful plays that have taken the stage here include ‘Closer to Heaven’, ‘The Vagine Monologues’, ‘Waiting for Godot’, ‘Mourning Becomes Electra’, ‘Murder Ballad’ and many others. Currently, the theatre plays host to Charles Dickens’ ‘A Christmas Carol’.

The theatre currently plays host to Six The Musical. 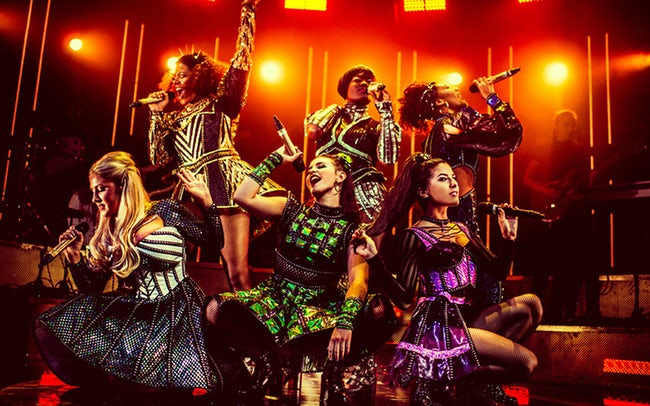 The play has garnered acclaim for its innovative take on the marriages of King Henry VIII that spanned 75 years. It would be nothing short of remarkable to watch the six wives dazzling as popstars when they channel their inner Beyonce, Adele, Avril and the like. This musical performance is sure to leave you craving for a lot more!

King Henry VIII has made it a point to keep all six wives of his on their toes. He constantly chides and reprimands them and speaks lowly of their deeds. Having had enough of the King and his persistent antics, they arrive at the conclusion that they need to speak up and make decisions for themselves. They re-energize themselves by bringing out their inner popstar and forming a band of their own. They eventually decide to go on a musical journey, firmly reinstating their stance on matters like feminisim, empowerment, and pop culture.

Click here to get a discount code for booking Six The Musical tickets.

Stalls - This section can be reached by taking 19 steps down from the main foyer. There are handrails placed on either side of the staircase. If you are looking for seats with extra legroom, please book any of the following - A1, A14, B1, B16-17, C18, and BB1-2.

Royal Circle: This section can be accessed via 5 steps up from the main foyer. Like the Stalls, there are handrails placed on either side of the staircase for your assistance. This section can also be reached via a sloped corridor that leads to the rear of the seating. There is 1 wheelchair seat located in Row F.

Food and Drinks: Food and drinks in plastic containers are permitted inside the theatre. If you purchase drinks at the bar, they need to be transferred into plastic cups before making your way to the auditorium.

Restroom: There are two bars at the theatre - The Foyer Bar and the Covent Garden Cocktail Club. Both offer a wonderful selection of wines, local and imported beers, spirits and other hot and cold beverages. World-class cocktails are served at the Covent Gardent Cocktail Club which is under the patronage of award-winning bartender JJ Goodman.

Bars: There are male and female toilets located down the stairs, towards the stalls. The access-adapted toilet is located in the Circle section.

There are several ways to get to Arts Theatre using public transport. Here are a few options:

Tube: The nearest tube stations to the theatre are Leicester Square (Northern and Piccadilly Lines) and Covent Garden (Piccadilly Line)

By Rail : Charing Cross is the closest National Rail station to the theatre. From Charing Cross, the theater is roughly a 10-minute walk.

2. Spaghetti House: In the mood for some hearty Italian food? Spaghetti house serves up classic Italian dishes that are both scrumptious and pocket-friendly! Pro tip - try their pizza!

3. P. F Chang’s Asian Table: One of the most famous Asian cuisine chain of restaurants across the world, P. F Chang’s is the ideal place to relish authentic Asian fare.

4. Five Guys: Burger, chips, and beer. What more can anyone ask for, really? Five Guys is a chain of fast food restaurants that serves mouthwatering American comfort food. Hungry and in a hurry? Look no further.