About The Theatre
Seating Chart
Chicago

Sultry Jazz tunes, the forgotten era of the 20s, and synchronised choreography the likes of which Broadway has never seen before—Chicago is an undeniable Broadway classic. With productions across the world including a 1970’s Broadway debut, the musical is a certified global phenomenon. The show returned to Broadway in 1996 at the Richards Rodgers Theatre before moving the production to the Ambassador Theatre in 2003. Planning on catching this iconic show? Our Ambassador Theatre Seating Chart will help you find the best seats! Also, here's a handy link to the seat availability and real time prices for different seats/dates for Chicago on Headout.

The 1996 revival of Chicago is directed by Walter Bobbie with the original book by Fred Ebb and Bob Fosse. Over the years many name celebrities have been a part of the production including Michelle Williams, Usher, Brooke Shields, Alan Thicke and many more. The show features showstopping tunes like All That Jazz, Cell Block Tango, and I Can’t Do It Alone backed with breathtaking dance numbers from a game ensemble.

This Ambassador Theatre seating chart has all the information you would need to have a magical Chicago experience. From seating chart and a detailed look at each section to restaurants nearby and ways to get to the theatre, we have it all for you. Let’s begin.

The Ambassador Theatre opened in 1921, intended to primarily host musical comedies and operettas. The first show that ran on this theater was The Rose Girl, followed by a string of iconic shows like The Diary of Anne Frank, We Bombed In New Haven, Celebration, Godspell, Dreamgirls, and Topdog/Underdog, before becoming home to the Broadway revival of Chicago in 2003.

Herbert Krapp designed the interiors of the Ambassador. The theater walls, ceiling, boxes, doorways and arches utilize more intricate Adam-style decoration, widely known to be Krapp’s favorite design themes. The theatre was built on a lot that was too small, which resulted in the auditorium being built diagonally. This caused the auditorium to be distinctly hexagonal and the stage to be very wide, resulting in a lack of wing space.

The Ambassador Theatre has 1088 seats, spread across three primary sections, orchestra, front mezzanine, and rear mezzanine. There are limited seats available for the pit and some standing row seats too. Each of these seats offer a distinct viewing angle and varied price points, depending on the view offered.

We have looked at each of the primary section in detail and also the price point for each. Let’s start with the Ambassador Theatre orchestra. Get $15 off on tickets
BOOK NOW

Value for money seats
Middle Orchestra and front Mezzanine seats.
• If money were no matter
Front Orchestra and Front Mezzanine
• Best views of the stage
Orchestra - the front rows (AA-B), middle seats (105-109). Front Mezzanine - the first few rows are considered amongst the best in the theatre..
• Best Legroom
Row A in Orchestra, row A in front and rear mezzanine and corner seats.

In the center orchestra, the front rows (AA-B), middle seats (105-109) are the best in the theatre, offering a clean view of the stage and bringing patrons as close as physically possible to all the action. The middle rows in this section are also good, offering a good look at the stage without any obstructions.

As you move further back, the quality of the view offered understandably dips, with the last few rows offering an average view at best. Center orchestra pricing follows a similar pattern, with the front row seats being the most expensive and the last row, the cheapest.

The left and right orchestra are pretty identical when it comes to viewing angles. Although, the seats closer to center orchestra are quite good while the extreme corner seats can be avoided.

Check out the real-time seat availability of the Orchestra section in the Ambassador Theatre.

The centre section is the most expensive, with the cost for seats in rows AA-B matching (and in some cases exceeding) the cost of front mezzanine seats. The left and right orchestra follow a similar pattern, with prices being similar to center mezzanine seats and decreasing with each row. The last few rows are the cheapest and make for a decent deal if the view offered is not a priority for you.

We saw Chicago at the Ambassador Theatre. It was a great way to see a Broadway show without breaking the bank. We sat on the right side towards the back of the orchestra and our view was perfect - Txjhgirl

Sat in orchestra seats, row G. Was pleasantly surprised at the amount of legroom given the reviews. Row G was WAY closer to the action than I had expected, probably due to the slightly smaller seat pitch - Mike Looking at view on offer, the front mezzanine offers a uniformly good look at the stage, especially the first few rows, which are considered amongst the best in the theatre. The last few rows of this section can be avoided if you don’t have a strict budget to follow. If you’re looking for cheap tickets for Chicago The Musical, go for the corner front mezzanine seats over corner orchestra seats.

Check out the real-time seat availability of the Front Mezzanine section in the Ambassador Theatre.

Well what can I say... it was the best show I've seen and will probably see in a long time! Fantastic!! The theater was great too, we were sat in the front row of the mezzanine, we had an excellent view - Rosie

Beautiful theatre on the 49th Street. Elegant and intimate. All seats are good seats, including those at the back of the rear mezzanine. Chicago is currently playing. A very good show in a very good place - Stephane

The final section of the Ambassador Theatre is the rear mezzanine. Like the front mezzanine, this section is also divided into four subsections with varying number of seats. The view offered by most rear mezzanine seats (except the first few rows) is pretty average, which explains the relatively lower prices.

If you’re on a tight budget and don’t care about the stage view, any seat in the mezzanine would be the best option. The standing row seating section is also a great option for budget conscious people.

Check out the real-time seat availability of the Rear Mezzanine section in the Ambassador Theatre.

The seats in the front and center of the rear mezzanine are the most expensive seats and are dearer than the side and back row orchestra seats. The prices fall as you move further back in the section, with the last rows mezzanine seats being the cheapest in the house.

One good thing about a small theater is that your cheaper mezzanine seats are closer to the stage than they would in larger, fancier theaters. That and the nice theater staff are the redeeming factors of this theater - Jay

The show Chicago was amazing but the theatre needs some work. The seats in the mezzanine are very tightly packed with no legroom for tall people like my husband - Bee

Here are some of the best restaurants around Ambassador Theatre:

1. Junior’s: Serving fine deli fare with a BBQ to boot, the deserts are the star attraction at this Brooklyn-themed restaurant.

5. The Lambs Club: A clubby, art-deco style restaurant in 132 West 44th Street, with cocktails and steaks to die for!

6. City Kitchen:This takeout joint serves the city’s best ramen in a straightforward, no-fuss manner, focusing on the quality of the food instead.

If you're looking for more dining options near Ambassador Theatre, our Broadway theatre district restaurant guide will come in handy.

The Ambassador Theatre is located at 219 West 49th Street, making it accessible from most parts of the city.

Travelling in your car? There are numerous paid parking spots close to the theatre too. Some of them include LAZ Parking, Edison ParkFest, Bright Management, and Impark.

Looking to score cheap tickets for Chicago on Broadway? Get great last minute deals on Chicago tickets on Headout, your one stop, on-demand mobile concierge.

Have further questions about the Ambassador Theatre seating chart? Need details about specific seats? Just drop your question in the comments below and we’ll get back to you!

Ambassador Theatre has 1088 seats
in total. 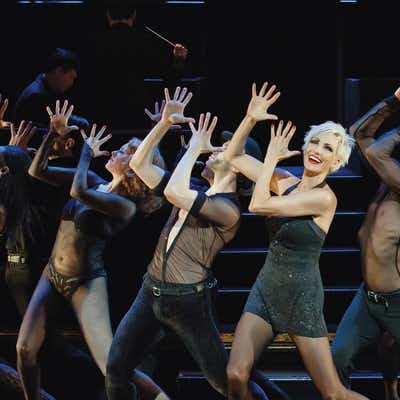